You are here: Home / Consumer Issues / Why the Customer Care Revolution Failed SO FAR: A Roadmap to Ultimate Victory Part 2
September 28, 2010 by Scott Broetzmann

In my last posting, Part 1, I reported CCMC research that concluded corporate America does a worse job at handling customer complaints today than in the 1970s. This is the case even though companies have invested literally billions of dollars upgrading their customer care programs (in call centers, satisfaction surveys, and a variety of other initiatives).

In Part 2, I’m going to examine why complainant satisfaction has not improved. 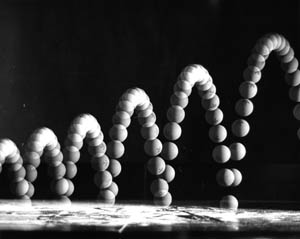 In a national probability study conducted by CCMC – a study we call the “Conventional Wisdom” study – respondents were asked to rate the importance of 85 telephone and 62 e-mail complaint-handling practices. The fourth highest rated policy (i.e., it promotes high satisfaction) for both telephone and e-mail complainants was: “You only have to contact the company once to get your complaint resolved.”

CCMC’s Customer Rage surveys, likewise, highlight the importance of first contact resolution. As the table below graphically illustrates, there is a significant drop off in complainant satisfaction when multiple contacts are required to solve customers’ problems. 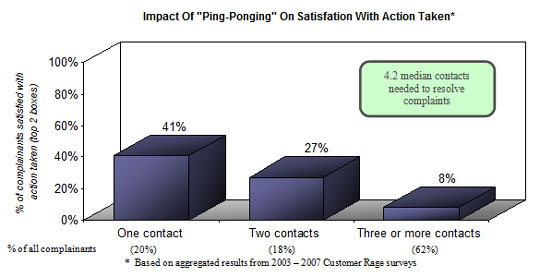 This finding is especially devastating considering that it takes a median of 4.2 contacts to resolve complaints. Companies seem to be adopting an irrational triage approach to resolving customer problems; one where the bulk of their complaint-handling resources are being channeled to those customers whose problems can never be satisfactorily resolved (where three or more contacts are necessary).

By “ping-ponging” the customer around, not only is complainant satisfaction decreased, but corporate administrative costs skyrocket. Additional headcount is needed to deal with the multiple contacts, and the cost of remedy escalates as customer contacts increase. The end result of ping-ponging is an inevitable negative ROI. 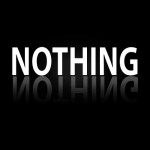 When respondents to the Customer Rage surveys were asked what they got as a result of complaining, more than 50% reported that they got “nothing.” Or as my late grandmother would have said in Yiddish, they got “bubkes.”

Among Customer Rage survey respondents who felt that they got something when they complained about their problems, those customers didn’t feel that they had gotten much. This is documented in the table below that compares what respondents wanted to get with what they actually got. Here’s where the concept of double “bubkes” comes into play. 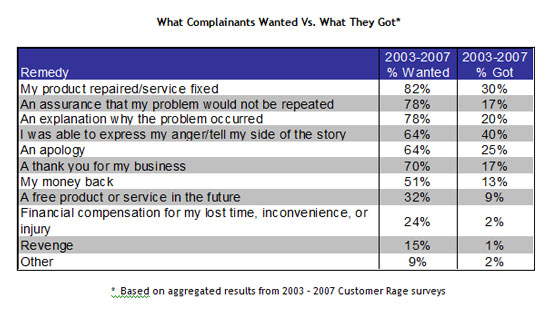 Not surprisingly, companies didn’t deliver when it came to monetary remedies (i.e., money back, product repaired/service fixed, a free product/service in the future, or financial compensation for lost time, inconvenience, or injury). What was unexpected, however, was the limited offer of non-monetary relief. Few complainants received the opportunity to vent, were given an apology, received explanations why the problem had occurred, and so forth. Corporate America seems as stingy with its manners as it is with its money.

In Part 3 of this series, I’ll demonstrate that this reticence to offer non-monetary relief is a major lost opportunity to retain customer loyalty. CCMC studies document that providing such non-monetary remedies increases complainant satisfaction significantly more than offering complaining customers nothing.

When respondents to the last Customer Rage study were asked whether they thought “the time (they) spent complaining to resolve this problem was worthwhile,” 61% said complaining was “not worthwhile.” When your efforts to resolve customer problems result in “bubkes,” why waste your time complaining?

The irony here is that, in the 1970s, companies spent limited resources disappointing their complaining customers. Today, they spend a fortune on customer care programs that often leave their customers much more dissatisfied than in the past.

CCMC’s conclusion is that corporate America is doing all the right things (call centers, satisfaction surveys, etc.) the WRONG WAY. My next posting, in Part 3, provides the ROADMAP TO ULTIMATE VICTORY. It offers policy recommendations that, if followed, convert customer care programs into a marketing plus instead of a source of negative ROI.

CCMC has prepared a white paper, “Customer Care – the Multibillion Dollar Sinkhole: A Case of Customer Rage Unassuaged,” that summarizes the results of the first replication of the National Consumer Survey. Findings from all of these Customer Rage studies are reported in a PowerPoint presentation presented at Arizona State University Business School’s 18th annual Compete Through Service Symposium. This material is available by contacting Scott M. Broetzmann at [email protected].